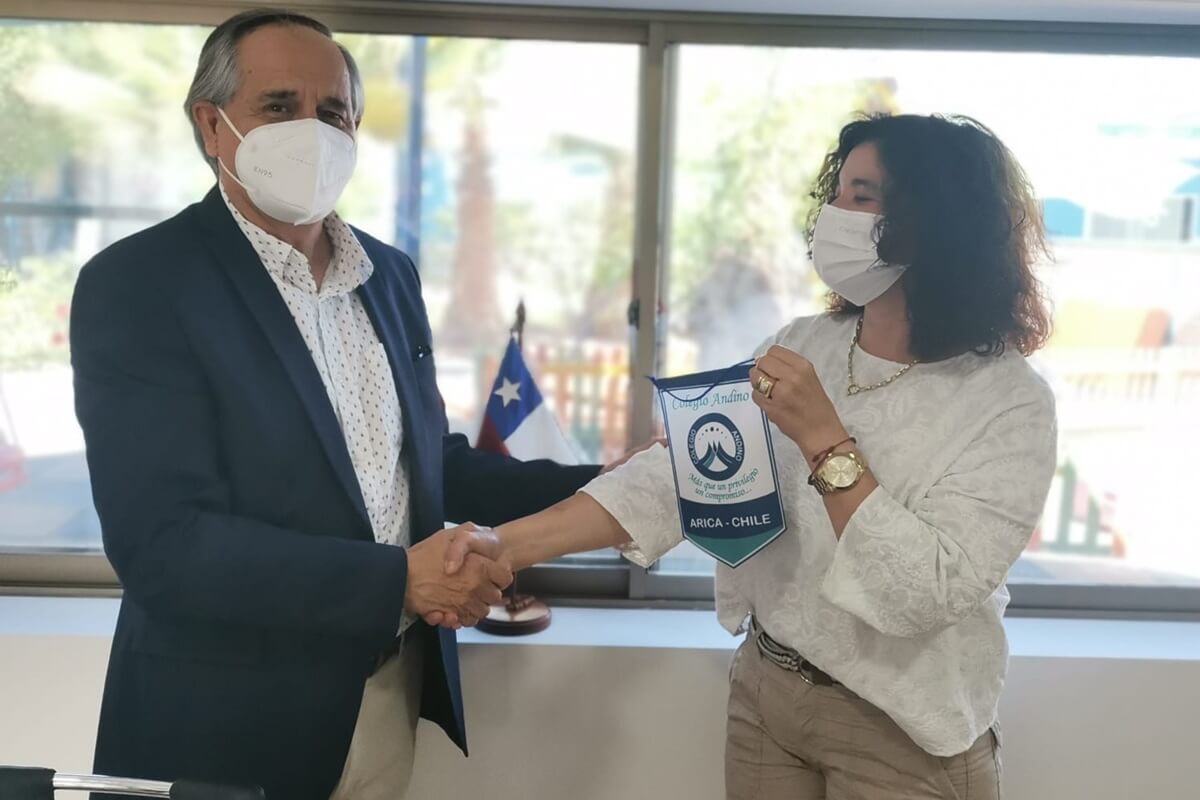 SIA Academy maintains its football training project. One of the best international football academies in Spain continues to expand its brand so that more boys and girls cross the pond in search of an opportunity in professional football. On this occasion, the visit took place at the Andino School in Arica.

The director of SIA Academy in Chile, Juan Fernando Ramirez, visited the facilities of the Chilean public school in the northern city of Arica. He was welcomed by the school’s director, Viviana Ugalde. The head of the school accompanied Ramírez as he explained the Soccer Inter-Action project in the school’s classrooms..

Chile is a country that is very passionate about football. Young people want to be professional footballers. It is much easier to reach that goal in Europe, especially in Spain, where there are many more opportunities. The Chilean country does not have sufficient infrastructure for that.

That is why the best Chilean football players are travelling to Europe to make it. International football academies in Spain are full of Chilean footballers looking for opportunities. SIA Academy is one of them. Now, the students of the Colegio Andino de Arica are already familiar with the work of Soccer Inter-Action.

What is Colegio Andino de Arica?

Colegio Andino de Arica is a private school located in the city of Arica, in the north of Chile. It has its origins in the Tutumpi Kindergarten created in 1986, becoming the current Colegio Andino three years later. Its transformation came after approval from the Chilean government to become an official school.

More than 30 years of teaching have placed Colegio Andino as one of the references in the city of Arica. They have pre-basic, basic and intermediate levels of education. This enables them to train hundreds of students before they go on to university.

Juan Fernando Ramirez, director of the SIA Academy in Chile, explained the project carried out at Soccer Inter-Action. The objective was to develop the training and football plan that is carried out at the SIA high-performance centre to show students between the ages of 13 and 21 why they should make the leap to Europe to play football..

In addition, Ramirez and the centre’s director, Viviana Ugalde, agreed to organise activities in the future to take several players to the SIA Academy. In this way, they will be able to see first-hand the work being done and learn about the experience of the Chileans who are currently at Soccer Inter-Action.

Soccer Inter-Action is a leading international football school in Spain. It welcomes many players from all over the world, although the most numerous arrivals come from Asian countries such as India or South Korea; and from American countries such as Mexico, the United States, Argentina and, above all, Chile.

Three players from Chile are currently staying and training at the SIA Academy: striker Antonia Ramirez, forward Daniel Farkas and goalkeeper Joaquin Luarte. All of them arrived in the summer of 2021 to improve their skills and become professional footballers in Spain..

Antonia, a reference for Chilean players

Women’s football in Chile still lags far behind. Players in the best women’s teams are barely paid a decent wage, without decent working conditions and competing on amateur football pitches. That’s why Antonia decided to travel to Spain to train at the SIA Academy and have a chance to become a professional..

For the moment, Antonia is doing just that. The 19-year-old Chilean striker is the top scorer in her competition and has been called up by Valencia CF to train with one of their teams. All this, thanks to the development she has been able to experience at the SIA Academy.

Farkas and Luarte are aiming to make it to SIA Academy’s first team, UD SIA Benigànim. They compete in the Spanish Third Division alongside other big clubs such as Valencia CF, Villarreal CF and Elche CF. Both have had the opportunity to train with the team at the SIA Center.

Before them, there were other Chilean players who passed through SIA Academy to develop their potential to the maximum. Some of them have managed to make a living from football in Spain. The pupils of the Colegio Andino de Arica could be the next Chilean Soccer Inter-Action stars.