﻿FOOTBALL TRYOUTS IN THE UNITED STATES

The academic and sporting training of the intern players at Soccer Inter-Action’s International Football Academy in Spain continues to bear fruit and to put the talented young footballers at its High Performance Centre on the path to the elite.

The United States is waiting for Domingo Infante. The 18-year-old defender has been selected and awarded a scholarship by Otero Junior College to begin his training in Business Administration and compete in their prestigious football team.

With the goal of fighting for the National Junior College Athletic Association (NJCAA) Division I title, Domingo Infante will be looking to put all his talent at the disposal of Otero’s coaches with the mission of excelling in order to attract the attention of professional clubs in Major League Soccer (MLS).

Domingo Infante, born in 2002 in Huelva (Spain), has had a great growth since his arrival two years ago at Soccer Inter-Action’s International Football Academy in Spain, located in Enguera (Valencia, Spain). The player, who plays as a central defender and stands out for his anticipation and ball control, came to SIA’s complete and comprehensive programme after participating in FC Porto’s High Performance Summer Camp.

After the good sensations acquired in this summer camp, whose 2022 edition is already being prepared, Domingo became part of the SIA Academy and FC Porto Dragon Force Youth squad, competing in the Preferente Valenciana and also playing minutes in the Amateur team.

Study and compete in the USA

The United States is one of the best alternatives for studying and building a future as a football player. However, making the leap to American colleges and universities is not easy, especially due to the level of studies required. For this reason, the option to be accepted by one of these prestigious institutions is to stand out as an athlete. In this case, a football player. Passing the tests to become a semi-professional footballer requires a great deal of effort.

The competition to get into Colleges and Universities is very high and getting a scholarship to compete and study is not easy, so it is vital to train and prepare yourself to make the leap when the time is right. Soccer Inter-Action is one of the International Soccer Academies in Spain that best manages this study-football binomial and the arrival of Domingo Infante at Otero Junior College is another name to add to its list of players who have been prepared in its High Performance Centre and who have managed to get much closer to their dream of being a professional footballer.

In the case of Domingo Infante, the central defender from Huelva will be part of the 2020-2021 class that will study Business Administration at Otero Junior College. This educational centre is located in La Junta, a city in the state of Colorado, famous for having one of the strongest teams in the MLS: the Colorado Rapids.

Alternatives to success in Europe as a player

The United States is a sensational option for the young player who is in the early stages of his development, but there is no doubt that Europe and its football still has a special flavour. Spain, England, Italy, Germany, France, Portugal are countries with tremendous football potential. And what could be better than training in an International Football Academy in Spain such as Soccer Inter-Action.

The SIA High Performance Centre is one of the most complete elite sports facilities in Spain thanks to the resources available. In an environment focused purely on sport – far away from the city of Valencia – SIA Center hosts players from all corners of the world who share the same goal: to train both athletically and academically with the aim of becoming a professional.

To this end, finding the right trials for each player is key. Soccer Inter-Action, in its aim to give all of its players the opportunity to show their full potential more beyond its High Performance Centre, has not only managed football trials in countries such as Spain, Portugal, Germany or, among others, England, but has also acquired the management of different Spanish teams competing in semi-professional categories, such as the Preferente and Tercera División Española.

UD SIA Benigànim, in the Third Division, and Discóbolo-La Torre AC, are the perfect showcases to attract the attention of the Spanish elite clubs, both subsidiaries of the big clubs and Segunda División B teams. 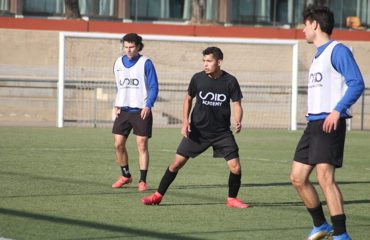