The International Soccer Academy and High Performance Center of Soccer Inter-Action says goodbye to the year 2019 with double sessions of elite training and a closing party where the fun reigned.

Be the best, train like the best! There is no better way to finish an elite Soccer Camps than with fun and soccer, a lot of soccer. The young players trained at the High Performance Center of Soccer Inter-Action these days have ended the first week of Christmas holidays with the satisfaction of having made the most of the turf of these spectacular sports facilities.

WHAT IS A HIGH PERFORMANCE SOCCER CAMP?

A large volume of young people (boys and girls between 14 and 21 years old) want to take advantage of their Christmas, Easter or summer vacations to improve their performance towards the return of their league championship or a new season in their team. country or as a form of trials or tests of players to look for an opportunity to enter new teams. For these young people who are looking to work intensively on their vacations, there are the high-performance soccer camps in 2019, where training and physical preparation reaches a point of greater intensity and the coaches demand more effort from the players.

Most of the training programs offered by the summer soccer camps are aimed at children of all levels, but there are several high-performance or technical soccer camps that offer a program with sessions very similar to those that are carried out. every day in the quarries of the best European clubs. In this list of camps appear very important cities at the soccer level, such as Madrid, Barcelona, ​​Valencia or Oporto, as well as countries with leagues as close as the Spanish or Portuguese. Look a little further down and discover FC Porto’s high-performance soccer camps for next summer.

In addition, one of the great advantages compared to the rest of soccer camps is the exploitation of the High Performance Center of SIA, a place where all the resources necessary to train as an elite soccerer are within reach. Soccer fields of natural and artificial grass, restaurant with personalized menus, high standing residence, video-analysis rooms, physiotherapy, leisure …

In conclusion, all the factors that make the soccer Camps a success, something that could be seen at the closing party with the distribution of Diplomas made by the coordinator of the Winter Camps: Pedro Dos Santos

Pictures of the diplomas of the campus of winter soccer 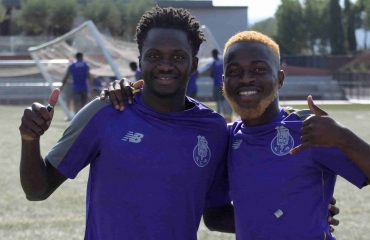