The young players have started to return to the elite soccer academy in High Performance Soccer Center SIA. The training shine again after the Winter Soccer Camps.

January has started strong for Soccer Inter-Action. The training routine returns after the High Performance Soccer Camps during the Christmas holidays at the elite sports facilities located in Enguera, Valencia (Spain). And is that the young players within the SIA Center have begun to arrive after his brief disconnection from the world of soccer, so the ball rolls again beyond the conclusion of the Soccer Camps.

Even so, the young players who are forming in Soccer Inter-Action are arriving little by little, something that has not caused any problem for the technicians of the Academy, who have programmed and designed training according to the available soccerers. In addition, not only in these first days have highlighted the exercises of our coaches, but the complementary training workshops have also returned with great force. In fact, on Monday the cooking workshop was conducted, led by our nutritionist Miquel Pérez. The internal players present on that first day of the Academy cooked pasta and learned the benefits of foods that provide more energy when preparing for a game or demanding training.

Beyond the International Soccerl Academy, in the Interactive Soccer sports facilities have also returned the training of our Football School FC Dragon of Porto Force, which this season has the ambition to continue improving level to your players and their teams.

Beyond the International Soccer Academy, in the Interactive Soccer sports facilities have also returned the training of our Soccer School FC Dragon of Porto Force, which this season has the ambition to continue improving level to your players and their teams. 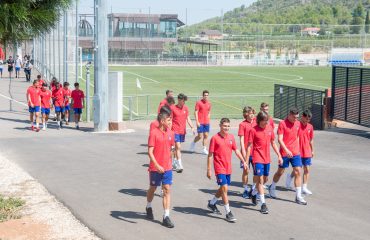